Ahasuerus used to have a store of his own. He had a family… he had a life. Then Jesus took everything from him. Now he’s on the run, never knowing when he’ll be caught, or where his enemies will turn up. He’d stop at nothing to get back what was his, except, well, that was a long time ago, and Jesus is dead now, and he’s immortal and maybe his family were kind of jerks, anyway.

He used to run into Longinus from time to time.

City by the winedark sea: Albion. Markfeet smokes cigarettes and curses the dead; the magicians ride past laughing on their way to class. Hoopla passes through on the way to stranger climes; the trains run south past Oast and Ontogeny-Among-the-Lilies to the nameless waste where the necromancers speak to the dead of Empire. Port town, college town; Albion drinks too much, smokes like a chimney, smears the white chalk of the cliffs black with disregard.

Alexander Hammil is many things to many people. He is old, young, fat, thin, male, female and nothing consistently. He is both sides of the law, and sometimes he can fly. Sometimes his teeth are loose in his mouth. Sometimes he is in a public place without pants and everyone is looking at him.

There is a room that is all hallway, all door. Asterion and Ariadne are forever lost, forever finding their way.

The Biker doesn’t get much in the way of respect from the other heroes, but he does good work, considering his super-power is a geeky ten-speed. Let me be clear: A SOCIETY DEPENDENT ON VIGILANTES IS A FLAWED SOCIETY.

Cain said to the Lord, “My punishment is more that I can bear. Today you are driving me from the land, and I will be hidden from you presence; I will be a restless wanderer on the earth, and whoever finds me will kill me.”

The Carnival is many things. First of all, it is a circus, a midway and a traveling show. Of course. It is also the silence that surrounds noise, and negative space. The Carnival is always Other; always two faces and never a candlestick.

“Who cares for you?” said Alice, (she had grown to her full size by this time.) “You’re nothing but a pack of cards!”

At this the whole pack rose up into the air, and came flying down upon her: she gave a little scream, half of fright and half of anger, and tried to beat them off, and found herself lying on the bank, with her head in the lap of her sister, who was 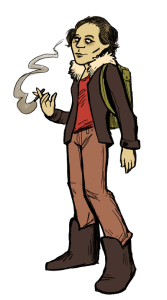 Cedar doesn’t stay in one spot for very long. There’s always something new over the next hill. She’s got a special fondness for the dark parts of cities and tangled nest of streets.

Colleen ran away from home and spent the next several years slowly starving to death. The Devil made her an offer she couldn’t refuse. She’s slowly learning the complicated, pointless rules that govern the Infernal Bureaucracy, and beginning her obsession with trivia.

Base cases. Rest states. Where everything ends, and nothing begins. Dark is the bottom of every game, and the tenth underworld.

Detective Brown can’t seem to get away from his job. He doesn’t sleep much these days.

Human vivisection was not outlawed until after World War II. A standard of medical ethics in research was not firmly in place until the late sixties; researchers at sanitariums would drill holes in the heads of epileptics and replace the cerebral fluid with helium gas in order to take clearer x-rays. Until the patient’s body replaced the lost fluid, their brain would sit directly on their skull. This led to blinding headaches and intense nausea, as you’d expect. Families were routinely denied visitation rights, and in many cases informed that their patient had died. Mercy and cruelty take many, many forms.

What are your favorite dinosaurs? Mine are the compsognathus and the confuciusornis! Feathered dinosaurs are the jam: the terrifying, terrifying jam.

Family politics are complex, local and vicious. Every hand holds a knife; every cup is poisoned.

Gawain is the most parfait and gentil of King Arthur’s knights. He’s often wrong-footed: mistimed, misspoken, ill-made. But parfait—o, most parfait!

The Great Detective thinks this is all a joke. He’s kind of an asshole, really. Crime isn’t a matter for dilettantes. 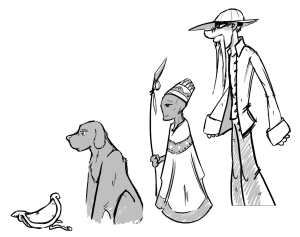 Hope was alive and now she was dead and was the world richer for her absence and poorer for her presence?

A little bit of money can get you into a lot of trouble. What crimes have you committed? What questions have you answered? What terrible secrets have you uncovered in your unexpected leisure?

Publish or perish, as they say. Jannes and Mambres are old hands at academic politics, but there’s this young upstart that’s maybe going to cause some problems.

Jillian is a slow accumulation of knowledge in the golden glow of an endless afternoon. Graduation looms with no particular urgency; you can always find work as a magician.

Judith is desireless; she is excellent; she is gone. The frontier is never truly tamed and madams are a convenient judas goat. Violence solves lots of things.

Leslie drinks too much and lets himself think too much about the world. He’s not nearly so hard-boiled as he likes to think. More pickled than anything, really.

In the beginning was Llyr, and Llyr was movement, and by her movement did the world come into being.

8 For Jesus had said to him, “Come out of this man, you evil spirit!” 9 Then Jesus asked him, “What is your name?” “My name is Legion,” he replied, “for we are many.” 10 And they begged Jesus again and again not to send them out of the area. 11 A large herd of pigs was feeding on the nearby hillside. 12 The demons begged Jesus, “Send us among the pigs; allow us to go into them.” 13 He gave them permission, and the evil spirits came out and went into the pigs. The herd, about two thousand in number, rushed down the steep bank into the lake and were drowned.

She couldn’t care less about crime but by god does she hate the deaths. The city breeds people faster than it breaks them, but only just.

Nameless is on the run from… something. Maybe it’s all in her head. She’s currently dead, but that doesn’t necessarily mean much.

The Paul-god is worshipped by hotel clerks, night watchmen, waiters at 24-hour diners, bartenders and everyone who has to stay up late peering into dark spaces wearing a name tag. He is short and bald and awkward.

Quiana and Solon are in love. They have killed each other again and again and always come back to each other. Love is the plan. The plan is death.

O Orpheus sings! O tall tree in the ear!
And all was still. But even in this suspension
new beginnings, signs, and changes were.

R Jesus follows the three commandments of messianic robots: do no harm, be the greatest servant of all, and allow 72 hours to pass before rebooting.

Whileaway is a planet of farmers, soldiers, knife-fighters. Russ has been all of them at one time or another.

A collaborative nervous chuckle. A collective fever dream. An endless game of Truth or Dare, where it’s always Truth and everyone lies. A clusterbomb trust fall.

Tits Akimbo owns this fucking town, and you’d better not forget it. Not afraid to get her hands dirty, either. Tits knows the value of effective PR.

Notes from a self-imposed exile. Outside the world is many things, and ever changing.

Vandyk is very good at her job. She started with crosswords and just got hooked on the harder stuff.

You were a long time growing into yourself. You are ashamed of this citadel you have built called a body. You rule yourself with an iron fist; there is no room for mistakes.

Are zombies overplayed or what? This should be a survivable plague, especially once the first great initial die off happens. We start cremating everyone, everyone takes biohazard warnings very seriously, we start hunting. I give it thirty, forty years tops before everyone readjusts.